DeWitt came into being in 1872 when the Burlington and Missouri River Railroad was completed from Crete to Beatrice. Swan City (Saline County’s first seat) was located a few miles west of the proposed town of DeWitt at the confluence of Swan and Turkey creeks. Said to have “one of the finest flour mills in the state,” it was faced with competing with the railroad town. In a short time the Swan City citizens moved their homes and businesses to the new town and thus helping it to develop. 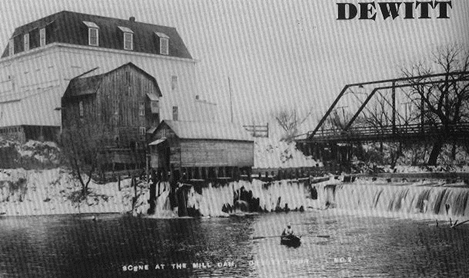 The railroad located its town about one mile west of the Big Blue River on the very edge of the county. The village was first named “Dennison” for the secretary of the land company. Mr. Dennison prevailed upon the town, through a $500 gift to the Congregational Church, to rename it “DeWitt” for his friend the Rev. DeWitt Talmage of the Brooklyn Tabernacle.

DeWitt followed the pattern of most pioneer towns with its good times and bad; its rough-necks and saints. It survived devastating fires, blizzards, droughts, grasshoppers, and floods, as well as the Great Depression.
The rural community was settled predominately by German immigrants. A German Lutheran Church was a prominent influence in the village although the Methodist and Episcopal churches were also important. These congregations continue to serve DeWitt with only a slight variation. The Lutheran Church is now affiliated with the American Lutheran Synod, and the Methodist Church merged with the Evangelical Church to become the United Methodist Church. In recent years the Lutherans and the Methodists have both built beautiful new buildings. All three institutions work in harmony and are basic to the stability of the community.

DeWitt’s first school was built in 1873. It grew with the town through the years. In 1966 the schools in surrounding district joined forces to form a consolidated school called “Tri County.” A school built just four miles from DeWitt includes students from Saline, Gage, and Jefferson counties. Providing good education to the youth of the community continues to hold a place of high priority.

In the heyday of the horse and buggy, DeWitt was a flourishing little town of 750 inhabitants. It supported five general stores, two law offices, two or three doctors, several newspapers, two banks, some saloons, and a dozen or more sundry and services. In addition to the Burlington, the Rock Island Railroad also served the town with its station a half-mile south of the village.

With the advent of the automobile, DeWitt could no longer support so many places of business. People could drive to larger cities to do their shopping. DeWitt did, however, continue to serve its rural clientele, and it has remained a viable community. While it relies on medical services and general merchandise services from larger towns, it continues to provide many items locally.

During the agonies of the Depression, something occurred that was to save the town. William Petersen, a Danish immigrant and blacksmith by trade, invented the “VISE-GRIP” wrench. He, his three sons, and a daughter developed a business from the idea. That was in the days when “real jobs were not to be had.” It was a great victory for the town when the last WPA worker got employment at the VISE-GRIP Plant. The enterprise that started in Petersen’s shop has continued to grow so that upwards of 700 people are currently employed. Merchandise, which now includes an entire line of hand tools, is shipped to all parts of the world. In 1984 the Petersen family, now into retirement age, decided to divest themselves of ownership of the corporation. The company became a subsidiary of American Tool Companies in 1985.  In 1993 Petersen Manufacturing acquired the IRWIN Tool Company. In 2002, Newell Rubbermaid acquired American Tool Companies and renamed it its current name: Irwin Industrial Tool Company.  In September of 2008, Newell Rubbermaid announced that it would be closing the DeWitt plant at the end of October 2008.  Production of the Vise-Grip moved to China, a move Rubbermaid stated was necessary to “remain competitive”.  October 31st, 2008 marked the end of the 84-year long production of Vise-Grips in DeWitt.

While having the factory was a godsend to DeWitt and surrounding communities, agriculture continues to be the basic industry in Nebraska, of which DeWitt is a part. At noon on any week day, farmers and factory workers alike can be found enjoying a good meal at one of the local restaurant-pubs. Mornings find retired men and women enjoying a visit over coffee and rolls.

DeWitt, while a town of only 500 people, is a community that has a lot going for it. It has made its mark worldwide through its good people, the products that were made at the factory, and the purebred breeding stock of its specialized agricultural ventures.